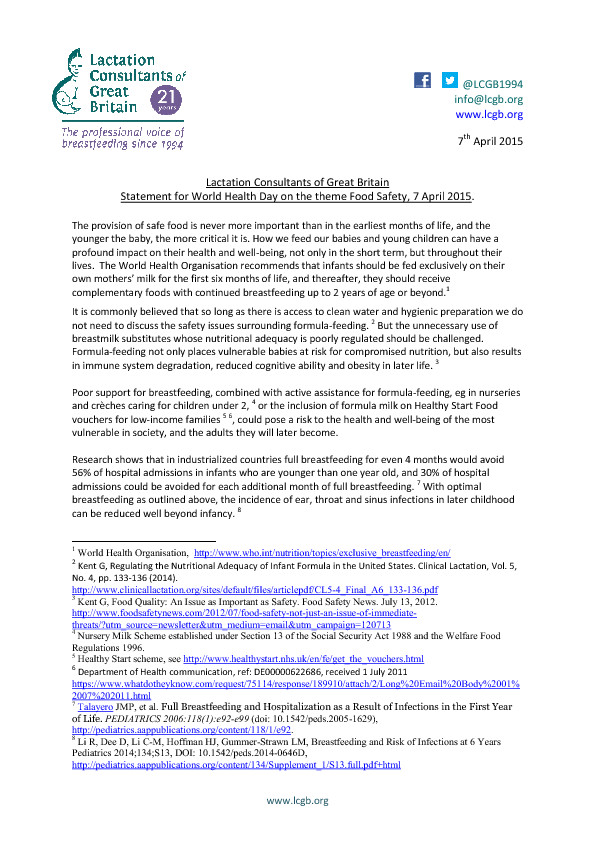 The provision of safe food is never more important than in the earliest months of life, and the younger the baby, the more critical it is. How we feed our babies and young children can have a profound impact on their health and well-being, not only in the short term, but throughout their lives. The World Health Organisation recommends that infants should be fed exclusively on their own mothers’ milk for the first six months of life, and thereafter, they should receive complementary foods with continued breastfeeding up to 2 years of age or beyond.[1]

It is commonly believed that so long as there is access to clean water and hygienic preparation we do not need to discuss the safety issues surrounding formula-feeding. [2] But the unnecessary use of breastmilk substitutes whose nutritional adequacy is poorly regulated should be challenged. Formula-feeding not only places vulnerable babies at risk for compromised nutrition, but also results in immune system degradation, reduced cognitive ability and obesity in later life. [3]

Poor support for breastfeeding, combined with active assistance for formula-feeding, eg in nurseries and crèches caring for children under 2, [4] or the inclusion of formula milk on Healthy Start Food vouchers for low-income families [5] [6], could pose a risk to the health and well-being of the most vulnerable in society, and the adults they will later become.

There is increasing evidence linking formula-feeding with increased sickness [9] [10]. Many epidemiologic studies consistently show that breastfeeding not only provides optimal bio-avaiable nutrients, but also protects against diarrhoeal, respiratory and other diseases [11] [12] [13] [14], including the non-communicable disease of obesity in later life [15] [16] [17] and leads to improved cognitive and psychosocial outcomes [18] [19] [20]. The UK Millennium Cohort Study estimated that exclusive and sustained breastfeeding could prevent 53% and 27% of hospitalizations each month due to diarrhoeal and lower respiratory tract infections while partial breastfeeding could prevent 31% and 25% each month, respectively.[21]

International Board Certified Lactation Consultants who are qualified to help mothers with breastfeeding in routine and complex situations, are aware that, with enough up- to-date information and timely skilled assistance, almost all mothers are physically capable of breastfeeding their babies. Thus current policies enabling low income or working mothers to formula-feed their babies are irrational, and should be challenged. From a health perspective, it makes no sense to help mothers to feed their babies unnecessary and inadequate breastmilk substitutes. Scarce resources would be better used in helping all mothers to breastfeed their infants exclusively for the first six months of life, and to carry on breastfeeding their toddlers until two years of age or more.   We should strengthen policies to support vulnerable, low income mothers, recognise the social contribution made by stay at home mothers, and protect the rights of breastfeeding mothers in the work place, better enabling all babies to be breastfed.

[4] Nursery Milk Scheme established under Section 13 of the Social Security Act 1988 and the Welfare Food Regulations 1996.

[13] WHO Collaborative Study Team on the Role of Breastfeeding on the Prevention of Infant Mortality. Effect of breastfeeding on infant and child mortality due to infectious diseases in less developed countries: a pooled analysis. Lancet 2000;355:4515.

Click on the image to open the LCGB World Health Day Statement April 15 as a printable PDF.