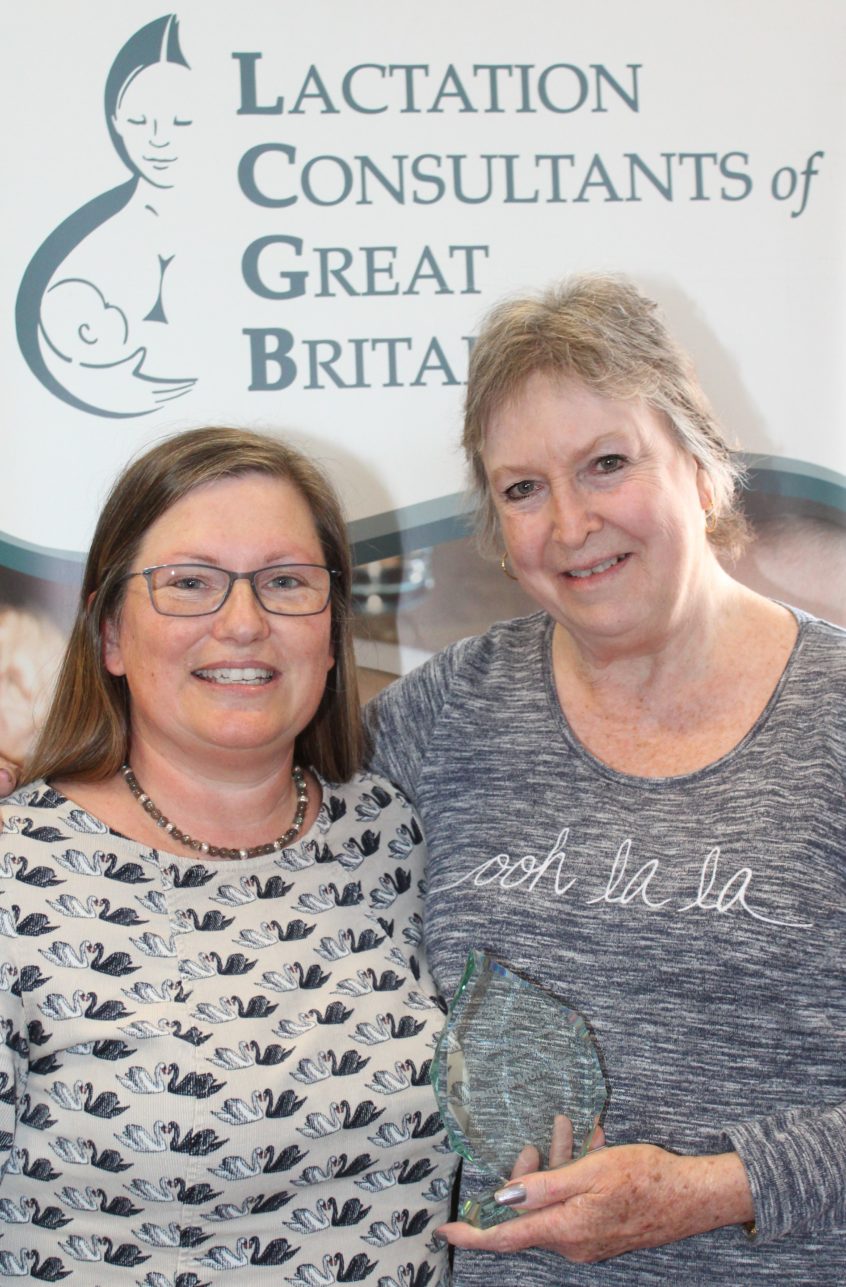 We are proud to announce this year’s recipient of the annual “Outstanding Contribution to Breastfeeding” award, bestowed at the LCGB conference, as Pamela Morrison IBCLC.

Pamela’s nomination was accompanied by this from one of her nominees – we felt it was a great summary:

“Pamela Morrison has worked with breastfeeding mothers and babies for over 30 years and has a particular specialism in breastfeeding in the context of HIV and managing low weight gain in exclusively breastfed babies.

Pamela served as a La Leche League Leader in Harare, Zimbabwe from 1987 before she certified as the first IBCLC in Zimbabwe in 1990. Pamela Morrison’s interest in HIV and breastfeeding arose from having worked as an IBCLC in private practice in a country where HIV-prevalence amongst pregnant women reached 1 in 4 mothers, yet breastfeeding was both the cultural norm and a cornerstone of child survival.

Whilst practising in Zimbabwe, Pamela also worked as a Baby Friendly Hospital Initiative (BFHI) Facilitator and Assessor, as well as serving on the Zimbabwe National Multi-sectoral Breastfeeding Committee and the national BFHI Task Force. She has also served on the World Alliance for Breastfeeding Action (WABA) Task Forces for Children’s Nutrition Rights, and for HIV and Infant Feeding, and the International Lactation Consultants Association (ILCA) Ethics & Code Committee.

Pamela worked in private practice until 2003, before moving to Australia and then to England. She served for many years on the Zimbabwean National Breastfeeding Committee and on the BFHI Task Force.

After moving to England in 2005, she was employed until 2009 as a Consultant to WABA. She is currently the ILCA media representative on HIV, and continues to do volunteer work for WABA.

Pamela was the lead author of the 2012 WABA HIV Kit ‘Understanding International Policy on HIV and Breastfeeding: A Comprehensive Resource’. This 12 paged set of documents aimed to clarify the confusion that has arisen during the last decade due to changing HIV and infant feeding guidance. It summarised up-to-date scientific evidence as at the end of 2012. Pamela has since served as Co-coordinator of the WABA Task Forces on Infants Nutrition Rights and on Breastfeeding and HIV.

Pamela continues to write and speak for the preservation and protection of breastfeeding in challenging situations, having authored and contributed to articles and editorials in publications such as The Lancet, Pediatrics, AIDS, Journal of Human Lactation, Journal of the American Medical Association, Archives of Pediatrics and Adolescent Medicine, British Medical Journal, Bulletin of the World Health Organisation, Journal of Acquired Immune Deficiency Syndromes, Breastfeeding review (The professional publication of the Australian Breastfeeding Association) and Midwives Information and Resource Service.

Pamela’s ongoing expansive career as an IBCLC has more recently included writing an article for ‘Breastfeeding Today; La Leche League International in 2016 on ‘How often does breastfeeding really fail?’; speaking as an invited speaker at the Breastfeeding Festival in Salford, UK 2016 on ‘Faltering Growth’ and on ‘Breastfeeding and HIV’ and at the GOLD Lactation online international conference in 2017 on ‘Managing low weight gain in the exclusively breastfed baby’.”

Couldn’t have said it better ourselves – congratulations Pamela! Read about other winners of this award HERE